PLATTSBURGH — The famed Arto Monaco (1913-2003) arranged “ships and men according to historical fact,” (his words) in a diorama depicting the battles of Valcour Island and Plattsburgh.

The late Upper Jay artistic genius captured the battles 1/64th their actual size in a nine-foot-long by six-foothigh model commissioned by the Plattsburgh Rotary Club at a cost of $10,000.

It was unveiled on September 29, 1976 at the Clinton County Historical Museum, where it was on permanent display in City Hall, according to a press release that appeared in the Press-Republican on the same date.

The diorama was packed up with CCHA’s subsequent moves, and 46 years on, it needs some work.

The Clinton County Historical Association received a Conservation Treatment Grant from the Greater Hudson Heritage Network for the conservation of Monaco’s diorama.

“CCHA was thrilled to get this grant,” Helen Nerska, museum director, said.

“We consider it the first phase in preparing the diorama to be exhibited as Arto Monaco originally intended for all to enjoy.”

He was born November 15, 1913 to an American mother, Ida Martin, and Louis Monaco, an Italian immigrant and hospitality entrepreneur.

With Kent’s encouragement and that of a neighbor, Mrs. Wells, who had a close relationship with Mrs. Pratt, head of Pratt Institute, Monaco, who didn’t have a highschool education, tested and was admitted to Pratt Institute, where he studied drawing, painting, graphic design and ceramics, according to a Mountain Lake PBS 2015 video, “A Castle in Every Heart: The Arto Monaco Story.”

Monaco graduated from Pratt in 1937, returned to Upper Jay for a spell, before heading west to Hollywood.

The Lake Champlain battles’ diorama was a gift to CCHA from the Plattsburgh Rotary, who commissioned the work for the 1976 U.S. Bicentennial celebration.

The diorama, on exhibit in CCHA Museum at 98 Ohio Ave. on the Old Base Museum Campus, depicts in exceptional detail both the Battle of Valcour and the Battle of Plattsburgh and is used to help tell the story of the Lake Champlain battles that influenced the entire history of the nation.

The conservation work will be carried out at the museum by Jennifer Baker.

“Conservator Jennifer Baker will be working with us to repair the surfaces and has suggested next steps after the surfaces have been conserved,” Nerska said.

“The vitrine covering the diorama has seen years of wear and tear and needs to be replaced.” 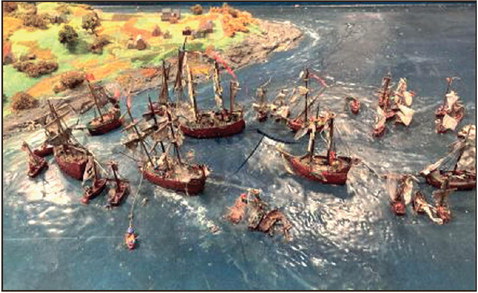 PHOTO PROVIDED The Battle of Valcour as depicted on Arto Monaco’s diorama. The diorama was a gift to the Clinton County Historical Association from the Plattsburgh Rotary, commissioned for the 1976 U.S. Bicentennial celebration. 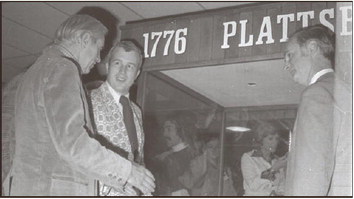 P-R FILE PHOTO Christopher Booth, president of the Plattsburgh Rotary Club (right) and Randy Beach, president of the Clinton County Historical Association (center) listen while Arto Monaco, creator of the Battle of Plattsburgh and Battle of Valcour diorama, explains the details of the scene. The Rotary donated the diorama to the Historical Association and the people of the area.

Click here to see this page in the eEdition: